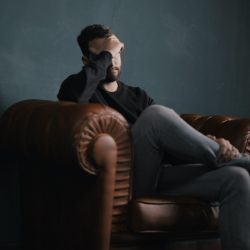 Peter Levine, Ph.D., a pioneer in body-oriented psychotherapy, describes an epiphany he had while treating a woman who suffered from excruciating agoraphobia (an extreme or irrational fear of entering open or crowded places) and a host of other symptoms:

…her body learned that in that time of overwhelming threat (a childhood trauma in which she was immobilized and unable to escape) she could not defend herself. She lost all of her power. Her muscles were all tight. She was struggling to get away—this was the flight response—to get out of that, to get away from those people who were holding her down and to run out of the room and back to her parents. I mean, that’s what her body wanted to do, her body needed to do—to get out of there and get back to where she could be protected. So what happened is all of this activation, this “energy” that was locked into her body when she was trying to escape and then was overwhelmed, was still there in a latent form. When we’re overwhelmed like that, the energy just doesn’t go away—it gets locked very deeply in the body. That’s the key. It gets locked in the muscles.

Levine’s key to treating this woman was to help her release that “locked-up” energy through a body-oriented approach. This approach evolved into a methodology called Somatic Experiencing®. Traditionally, psychology has viewed anxiety and PTSD as psychological conditions, The emerging view, however, one which is increasingly supported by neuroscience and the polyvagal theory of trauma is that trauma-related disorders are not disorders of the mind, but the result of uncompleted activation cycles of the fight| flight| freeze response that humans share with other mammals. That is, they are disorders of the body, particularly the nervous system.

Trauma is bad news for relationships

For those of us with such traumas, whether from childhood or later, these unreleased reactions are mysterious and unpredictable, because they happen at a level beneath our conscious awareness or understanding. Some interaction, event, or even a random thought may trigger a sudden cascade of anxiety, panic, anger, or even rage. This is why spouses and partners of trauma survivors may find themselves bewildered and afraid because of seemingly irrational responses by their mate to something they’ve said or done. Or the spouses and partners may find themselves in a relationship with a person whose survival strategy is to self-soothe through addictive substances or behaviors.

Top-down: One mode of treatment for trauma, the more traditional mode, is to increase knowledge and insight in order to help the client understand the traumatic response: what happened, why it manifests the way it does, and how to manage the thoughts and symptoms that arise. This is described as “top-down” because knowledge, insight, and understanding are functions of the more recently evolved parts of the brain (the prefrontal cortex–the rational, thinking part of the brain), which sit on top of and around the more primitive ones.

Bottom-up: This relates to working directly with the feelings, emotions, and sensations that arise within the body, as the body-oriented psychotherapies do. These approaches access and “recalibrate” the more primitive layers of the brain, which we might characterize as the instinctual and emotional parts of the brain.

A critical task of the “top-down” approach is to integrate the dissociated memories into a “coherent life narrative.” An equally important task of the “bottom-up” approach is to integrate dissociated feelings into one’s inner experience so that it becomes clear what was then and what is now. Without this level of healing, life is stunted. Pierre Janet, a pioneering French psychologist, philosopher, and psychotherapist in the field of dissociation and traumatic memory, observed,

When patients dissociate their traumatic experience, they become attached to an insurmountable obstacle: unable to integrate their traumatic memories, they seem to lose their capacity to assimilate new experiences as well. It is as if their personality has definitely stopped at a certain point and cannot enlarge anymore by the addition or assimilation of new elements.

Janet predicted that unless patients become aware of the split-off elements and integrate them into a story that had happened in the past and was now over, they would experience a slow decline in their personal and professional functioning. This phenomenon has now been well documented in contemporary research.

Though gaining a coherent life narrative is tremendously important, “the rational brain is basically impotent to talk the emotional brain out of its reality,” according to trauma expert Bessel van der Kolk. This is where bottom-up approaches enter in. According to van der Kolk, the task of therapists is to work directly with body and senses to draw out the sensory information that is frozen and blocked by trauma; help patients befriend (rather than suppress) the energies released by recovering their inner experience; and  complete the self-preserving physical actions that we’re thwarted when the patient was traumatized, e.g., trapped, restrained, or immobilized by terror.

Therapists and other healing practitioners who integrate top-down and bottom-up approaches aim to help trauma survivors feel differently in their bodies, to feel safe; to have normal life experiences restored. According to van der Kolk, “We must most of all help our patients to live fully and securely in the present. In order to do that, we must help bring back those neurological (i.e., energetic) structures that deserted them when they were overwhelmed by trauma.”

Other than specific trauma-informed therapies, how do we get people back here, fully alive, in the present? How do we coax them back into their bodies, into their lives? Since a great deal of the human brain is dedicated to living in synchrony with other humans, there are “bottom-up” trauma healing activities that have been a part of human cultures for ages, e.g., dancing, group drumming, yoga, chanting, choral singing, qigong, tai chi, martial arts, drama, and dramatic or musical improvisation. Modern trauma recovery experts even prescribe ancient mindfulness meditation practice.  “Mindfulness is a cornerstone of recovery from trauma (van der Kolk).”

The power of relationship in trauma recovery cannot be overestimated. As Harville Hendrix, Ph.D., the father of Imago Relationship Therapy observes, “In relationship, we’re wounded, in relationship we heal.” Some of the most pervasive trauma is that which occurred in childhood, at the hands of those who were supposed to protect us from harm. A professional, intentional, therapeutic relationship, characterized by deep listening and attunement, can do much to restore the neurological structures and relational capacities damaged by trauma. For a couple struggling with the effects of trauma in the lives of one or both members, a professional relationship with a qualified Imago Relationship Therapist can help turn the relationship from a source of pain into a powerful source of healing.