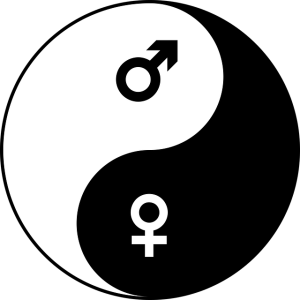 Reflecting on the relationships of many of my young clients and even my kids, nieces, and nephews, I think this is an interesting era we’re living in when it comes to human pair-bonding. While us older men are trying to figure out how to hold onto our cherished gender distinctions (because that’s how we learned to know ourselves as male), young couples are exploring what human “masculine” and “feminine” (read: yin and yang) energy might actually be, apart from the socially constructed roles we inherited. I’m starting to understand that we don’t have to define the yin-yang energies by particular roles or rigid divisions of labor. That stuff can all be negotiated! The energies themselves are real enough and biological; though by “biological,” I don’t mean gender-bound. These are energies that exist across the mammalian kingdom and, the Taoists would say, in all of nature. You see masculine and feminine energy even in same-sex couples. There’s always a yin and a yang, without which nothing would happen. These energies don’t require a sociologically constructed shape.

I don’t mean to imply that all this is being worked out seamlessly and fairly right out of the gate. But an easing of rigidity in the expression of masculine and feminine is underway.